Like many birds, retired people and, in the old days, sheep*, I go south for the winter, despite being none of those things. In my case it’s little more than a symbolic few days in the New Year, what with work and real life and that kind of thing getting in the way, but we always do it. Despite the heat of summer here, the winters are cold, and it breaks the tedium of frosty mornings and overcoats. 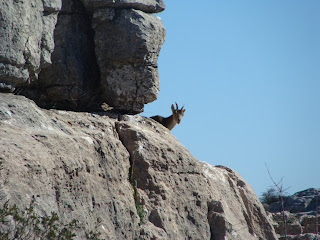 This year, like last year, we only got as far as Málaga. It’s easy to get to, and it’s far enough for the purpose of thawing out the limbs and getting the blood to return to the tip of the nose, one of the many little annoyances of winter. Málaga has beaches, mountains, restaurants and… well, do we need anything else? Oh, and a bit of history as well, having been founded by the Carthaginians and occupied by the Moors for centuries. They left a great fortress overlooking the city and the sea which is worth climbing up to if you’ve never done it before. A good way to earn your beer and grilled fish, too.

We spent the days running on the front, walking along the beach, eating in the beach restaurants where the sardines are grilled on spits in little boats, and watching the world go by. It takes some curious shapes down there. After all, if you were a tramp or a backpacker or a squatter or a traveller in search of truth and spiritual freedom, where would you spend the winter?

We went one day to walk in the Torcal, which is an extensive area, about 5 sq miles, of karstic formations 4,000ft up near Antequera. It’s a very tricky place to scramble around, and easy to lose your footing and break an ankle or bang your head, but the extraordinary landscape of rocks, the colours of the vegetation, the clearness of the air and the agility of the goats make it a good way to spend the day. We made it back without accident and allowed a few cobwebs to be blown from the mind. On the way down there are a number of home-style restaurants where the tissues may be restored at a reasonable price. So we did. 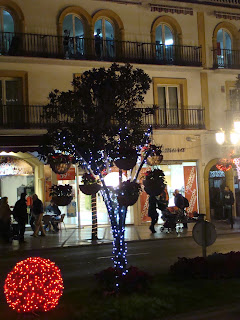 During those days I rediscovered the writer Saki, who I had more or less forgotten existed. I read his Chronicles of Clovis, and they are fun, fresh, clever and he cares nothing for the sensibilities of the reader. If you don’t like him you can put the book down but he isn’t going to be nice just to keep your custom. He clearly influenced Wodehouse, in style, though not in the brashness of his repartee. I tried to collect a few quotes to illustrate what I mean, and why you should read him, but out of context they seem to lose their shine. In any case, I offer some snippets to tempt the reader:

Constance is one of those strapping florid girls that go so well with autumn scenery or Christmas decorations in church. "

Constance shuddered. 'Do you think the poor little thing suffered much?' [of a child eaten by a hyena] came another of her futile questions. "'The indications were all that way,' I said; 'on the other hand, of course, it may have been crying from sheer temper. Children sometimes do.'

There's nothing in Christianity or Buddhism that quite matches the sympathetic unselfishness of an oyster. Do you like my new waistcoat? I'm wearing it for the first time to-night."

My mother is thinking of getting married." "Again!" "It's the first time." "Of course, you ought to know. I was under the impression that she'd been married once or twice at least." "Three times, to be mathematically exact. I meant that it was the first time she'd thought about getting married; the other times she did it without thinking. As a matter of fact, it's really I who am doing the thinking for her in this case. You see, it's quite two years since her last husband died." "You evidently think that brevity is the soul of widowhood."

"Well, it struck me that she was getting moped, and beginning to settle down, which wouldn't suit her a bit. The first symptom that I noticed was when she began to complain that we were living beyond our income. All decent people live beyond their incomes nowadays, and those who aren't respectable live beyond other people’s. A few gifted individuals manage to do both."

[I] was eighteen on my last birthday." "On your last two birthdays, to be mathematically exact." "Oh, well, that's not my fault. I'm not going to arrive at nineteen as long as my mother remains at thirty-seven. One must have some regard for appearances."


*The history of transhumancia is one of the lesser-known tales of the past of Spain. For centuries, and into living memory, though not mine, thousands of shepherds drove flocks of sheep hundreds of miles south in the winter and north in the spring, following the pastures and the markets. They slept many months a year in the open, or in makeshift tents and shacks, barely ever washing and never changing their clothes. If Hollywood were in Spain they would have turned them into heroes, and we would all sing songs about them, and want to be them when we played games as children. Now it has gone for good, and good riddance. It was a very tough way to live, but seen from a distance, there is romance and beauty in it.
Publicado por The Hickory Wind en 8:28:00 PM