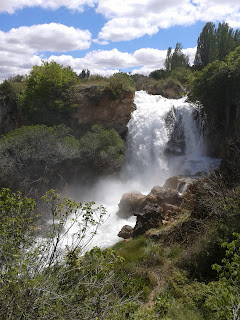 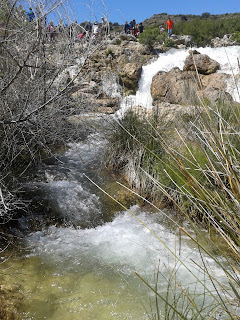 We have been at our little country hideaway for a long weekend. It's been a very wet winter and spring and when it rains a lot in the mountains the water table rises, the lakes fill to the brim and where one becomes another the jumps between them are now looking like this. The bike and I have seen a lot of tracks and a lot of water this weekend, and it's been very pleasant. 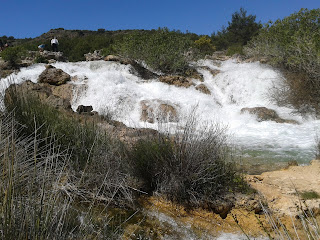 The Grass Ain't All That's Blue in Kentucky 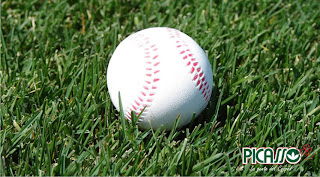 To judge the truth or falsehood of this statement requires the construction of a series of contexts in which it is possible to understand the words and the ideas expressed by their composition to have meaning about which argument may proceed.

On the face of it, and interpreted with a minimum of real-world knowledge, without which no context can be sufficiently reconstructed, the statement affirms that there is something in (the state of) Kentucky which predominantly reflects electromagnetic radiation in the wavelength range ~450-495nm. This much can easily be shown to be true, but the truth of the full statement is contingent on the grass in that state also having that property, and this is rather more problematic. It is reasonable to assume that the reference is to Poa pratensis, but even this specific grass is not in fact blue. The seedpod passes through a blue stage as it matures, but, unlike flowers, grasses are characterized by the enduring hue of the stalk, not by a moment in the life of a small part of themselves.

The line is the title of a song and it is necessary that it be true in some sense, or the song would be meaningless, worthless. Let us postulate that the song is not in fact worthless, that there is truth in this statement, and try to uncover the type of truth that lies within it.

Truth is entirely context-dependent, because meaning is entirely context-dependent. Much of the difficulty in determining what is true comes from insufficiently rigorous definition of the context in which the statement to be assessed is made*. Here we begin to see that the truth of the implicit and explicit statements in the above sentence must be considered each in a context of its own. The word ‘blue’, in the absence of any context other than what it conveys in isolation to a normal speaker of English, suggests a colour. In this context it would be clearly false to say that the genus Poa is blue. The grass of Kentucky is, however, nominally associated with the colour blue, and in the context of socio-cultural symbolism it may clearly be held to be true that the grass in Kentucky is blue. This is important, because if it were not so the line would be weakened to the point of meaninglessness. But it also shows that acceptance of the statement as true depends on our placing it in a context quite different, scarcely even intersecting, from the original context in which placed the term blue.

The Kentucky reference suggests that it is a country song, and is therefore, about some guy getting drunk because his girl has left him. Suddenly we are making considerable progress, because this leads us to the idea that the other thing in Kentucky which is, in the context of human emotion as expressed in fireside slang, blue, is the singer himself. This can be established beyond doubt by listening to the song, and it will be found to be true. It also gives the line a dramatic interest which the mere affirmation of the existence of blue doors, cars, trousers or lawnmowers in that beautiful part of the world could not possibly have. But note that there is no overlap whatsoever between the contexts in which it is necessary to understand the use of the term ‘blue’ in order to attribute the quality of truth to the original statement.

I conclude, therefore, that the proposition is demonstrably true, and that the non-intersecting contexts in which the parts of the proposition must be interpreted are contained within it, at least when it is read by the kind of person for whom it was intended. So not only truth, but successful communication.

*"You don’t love me anymore, you’re seeing that blonde at number 27." "My darling, I cannot answer this accusation, you are insufficiently rigorous in defining the epistemological context of your remarks."
Publicado por The Hickory Wind en 8:00:00 AM No comments: Enlaces a esta entrada